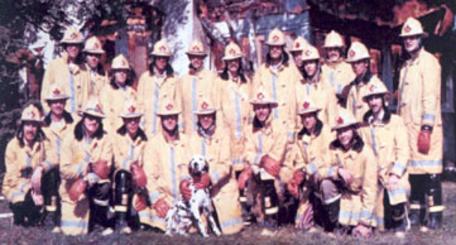 The department was first formed with 20 volunteer firefighters and a paid Chief operating out of one station on the south side of the city. The 4,800 square foot building included two bays (enough room to house four trucks), a meeting room, dispatch office, fire chief office, workshop, hose tower, and storage area. The department responded to 123 calls during the first year. At that time, the city had a population of 10,039. The Osseo Fire Department continued to provide service to the northern part of Maple Grove as well as their own city.

With the rapid growth of Maple Grove, it became apparent that additional fire protection was needed, and in 1978 the old City Garage was converted into the second station. With the addition of this station, fire insurance rates for homeowners were lowered. In 1986, with the passing of a bond issue, one station was closed and two new ones were built.

Today, the department operates out of five stations with over 95 men and women serving their community. They cover a 36 square mile area, with a population of more than 61,000.

The Maple Grove Fire-Rescue Department has been serving the community with a paid-on-call staff since 1975. The proposal for a fire department in the city was brought before the council on May 6, 1974 by the Citizen Long Range Improvement Committee (CLIC). The committee recommended that top priority be given to the establishment of a volunteer fire department in conjunction with the city of Osseo providing equipment and personnel for the new station.